The other day I was enjoying some tv surf time.  It doesn’t happen very often so I love my time on the couch watching mindless tv cuddled up next to Dear Husband.  I stopped on TLC to see what crazy was happening on Toddlers & Tiaras.  Mistake.  In the few seconds (literally, it was about 10 seconds) I was watching I saw a mom and her what looked to be 2 year old daughter.  The mom wanted to curl the daughter’s pageant wig.  Sitting on her couch she put the wig on a teddy bear and proceeded to curl what was an already curly blond wig and sought help from her toddler.  She set the hot curling iron on the couch to comb the wig and while she was talking to the camera her daughter grabbed the hot end of the iron.  There was crying and cool water was applied and the mom gave hugs, kisses and I’m sorrys.  She told the camera that she was surprised that her daughter did that because she has told her before that the curling iron is hot.  SHE’S TWO! The curling iron has a gold shiny barrel, it’s sitting on the couch and you don’t expect her to pick it up?!

I got so upset that Dear Husband made me change the channel lest I work myself into a tizzy.

Excuse me a moment while I step up on my soap box.

I don’t know who I should be more upset at.  Should I be upset at the parents for subjecting their children to such a ridiculous hobby?  These parents have no problem telling us how many thousands of dollars they spend on costumes, wigs, make up artists, etc. not to mention the cost of travel.  Are you kidding me?  What lesson are they teaching their children? Oh, wait.  These parents aren’t really concerned with teaching their kids anything of value.  The only lesson I can see these girls coming away is one of vanity.  A lesson where it’s all about me.  A lesson where whoever spent the most money and whoever is prettiest is always the best.  A lesson of egomania.  It makes me sad and gives me a queasy stomach.

Should I be upset at the people who put these pageants on?  They have clearly created an environment where the only way to win is with spray tan, huge wigs, false teeth, false eyelashes, the list goes on and on.

Should I be upset at the producers of the show?  They go into these pageants and film multiple families then take the most dramatic and over the top contestants for our viewing pleasure.  Which leads me to…should I be upset at the viewers?  It’s the viewers that drive the next season into production.  It’s people like me who sit on my couch and watch because it’s a train wreck and I can’t look away.

Should I be upset at TLC?  TLC has brought us such gems as John & Kate Plus 8, Kate Plus 8, Sister Wives, 19 Kids and Counting.  I’m right there in the mix watching some of this crap so I realize that I am part of the problem.  Remember when TLC first started?  It was called The Learning Channel.  Sounds like the only thing parents are learning now is how to exploit their children for cash and air time.  There is good stuff to watch on TLC but they are on my radar right now so they are going to take the beating.

Okay, now that I have that off my chest I’m going to come down off my soap box and take a breather.  I’ll be over it soon and move on to more important things like how to incorporate shredded coconut into oatmeal chocolate chip cookies.  For some reason I have three bags of shredded coconut.

Something tells me that Toddlers & Tiaras isn’t going anywhere so the best thing to do is mock it. I’ll leave that to Tom Hanks. 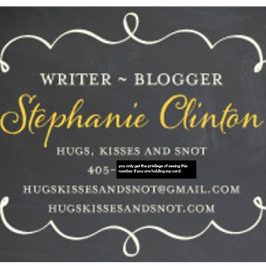 So yesterday I gave a bit of a recap of what is going on in...

A clean house.  It does not happen very often here at Casa de la Hugs,...

So apparently it’s Cyber Monday.  Sounds like another invention by retailers to brainwash us consumers...

It’s been almost one entire week since I’ve posted anything.  I have no idea if...