Even though I have titled this post A Conclusion I don’t really know if it is.  When it comes to parenting there is never a conclusion so I guess this is sort of a conclusion to this little chapter in our lives.  The beginning of this “life chapter” can be found here.

Around the time pre-school was starting we were beginning to wind up our listening therapy with our OT.  We had started with the OT in December and by June of 2008 the therapist felt that the therapy had progressed nicely and Addison had made enough improvement that he would be done seeing her by the end of the summer.  That was music to my ears and confirmed the changes I had been seeing in him.

I remember one day that stands out in my mind as somewhat of a turning point.  Addison and I had spent the afternoon at the zoo.  It was getting close to dinner time and I knew we wouldn’t be home soon so I took a chance to have dinner out.  Dear Husband worked in Oklahoma City at the time so I called him to see if we could meet for dinner somewhere in the city.  Previously this change in plans would have ended very badly but we had had enough good days and I was ready to take a chance.  Guess what?  Dinner turned out okay.  6 months prior such an abrupt change in plans combined with being away from home all afternoon combined with a tired and hungry boy would have been a recipe for disaster.  When we got through dinner without a melt down and made it home with our sanity intact I knew we had turned a corner.

We still had our moments.  Pre-school was a hurdle to overcome.  It was a new routine to get used to with new kids and new adults.  For the most part he did really well except when he would get hurt (emotionally or physically) and that seems to happen a lot to 3 year olds.  It seems that most kids want to be cuddled and consoled when they get a bump on the head.  Not Addison.  He would stiffen up, reject any sort of physical comfort be it hugs, an ice pack or kind words.  This took some getting used to for the teacher as she is a very huggy, lovable lady who wants to wrap those kids in her arms until they stop crying.  It took time but over two years those inconsolable days became fewer and fewer.  Slowly we worked on coping mechanisms.  The teacher and I did a lot of coaching on using his words to tell us how he is feeling and what we can do to resolve the problem.  We talked a lot about avoiding situations that were going to cause him grief.  One thing in particular was a little boy who seemed to hone in on Addison and cause him a lot of anxiety.  Whether it be banging into him during recess or taking a toy or book he was playing with, dealing with this boy was a struggle.  I don’t think this other little boy was being mean for the sake of being mean.  I think, like Addison, he had a hard time controlling his body, emotions and actions and for some reason found Addison an attractive target for his wild antics.  By the end of our time at pre-school this boy was no longer a problem as Addison had finally figured out how to work around him.  I couldn’t believe how much he had changed in those two years.  He went from a boy dealing with SPD to a loving, playful kid who was more than ready for kindergarten.

I write all of this for those moms (and dads) out there who are at their wits end.  Parents who are in a love/hate relationship with their little one and honestly wonder if they are going to make it out of parenthood alive.  If you are one of those parents please know that it get’s better.  Turn to your friends and family for help.  I kept my problems hidden for the most part and tried to deal with them on my own.  Asking for help made me feel in some way that I was a failure.  I went into mommyhood thinking I should be able to handle whatever came my way with grace and poise.  Well guess what, nobody is that put together.  Once you find people you trust…who you can call to watch the kid for an hour or someone to pour your heart out to you will discover that they are probably feeling just as insane as you are and appreciate the comradery.

It was sometime during this positive transition that Dear Husband and I decided that having another child would not be the end of the world.  We seemed to be coming out of a valley and a sibling was starting to sound like a joy instead of a curse.  But that, my friends, is a whole different story.

Disclaimer:  These personalized microfiber towels were provided to me by Personal Creations.  All thoughts, opinions,...

Guess who likes Angry Birds?  Everybody and their dog, that’s who.  Addison loves to play... 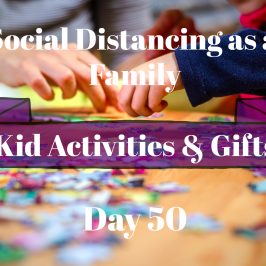 Everyone say it with me….Day. Fifty. The boys have gotten into a rhythm here in...

This is a conversation that took place over dinner this week. Addison:  There was something...