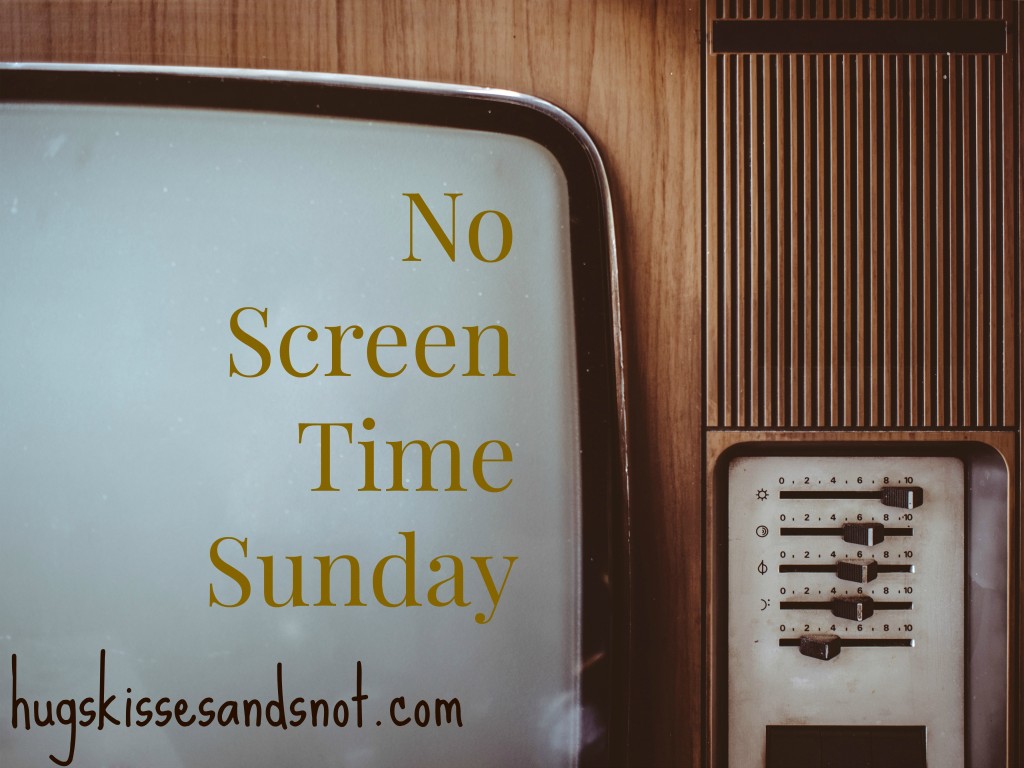 After reading the book Raising Grateful Kids In An Entitled World, I started thinking about the amount of screen time our family has. Actually, I’m always thinking about it and threatening to take it away but the threats usually remain just that, threats.

This past Sunday was one of those mornings that threatened to devolve into a post apocalyptic world where everyone is defending themselves with pointy sticks, wearing patched leather, sporting half shaved heads and all around miserable. Here is what went down that almost turned our house into Fury Road. 15 minutes prior to leaving for church, Addison decided to turn on the WiiU and start a rousing game of Splatoon. When I told him it was time to go and to turn it off, he informed me that he couldn’t stop because he was in the middle of a battle. Just a few more minutes.

Let me stop right here to let you know what happens to me when I hear the words just a few more minutes from any little person residing in my house who is playing a video game or tuned into a device. Fire erupts from my ears. When I say “turn it off, it’s time to go” I mean right that minute. Not in 10 minutes. Some may think me unreasonable or sound like I’m skirting Tiger Mom territory but I’m the adult, they are the child, I’m in charge, end of discussion. That’s not to say that I give in all. the. time. to allowing a few more minutes of screen time.

Back to our Sunday morning scenario. I told the oldest one it was time to go and was met with the response that he was in the middle of a game and needed a few more minutes. Guess what? I don’t care. I don’t care that a game is in process. It shouldn’t have been started in the first place and needs to be turned off. He informed me that he didn’t know how to stop mid game and that there wasn’t a way to pause it so my advice to him was to just walk away. Setting down the controller mid-game and walking away was almost incomprehensible. But somehow he was able to get his muscles to cooperate because he knew that my wrath was greater and far more terrible than what would happen to his game with out someone there to complete it.

We left for church and I must say that I (mostly) kept my cool. I took a few deep breaths before I got in the car, swallowed my fashion pride that threatened to explode over his pants that looked like he had slept in and were way too short (and not in a cute J. Crew rolled cuff with oxford shoes kind of short) and calmly told him why I’m so hard on him and why I expect so much of him. I told him that a big part of our job as parents was to make sure that he would be ready to jet off successfully into the world when he became an adult. I told him that I want him to go out into the world and be positive and productive and happy and that in order to do those things you first must learn responsibility and how to be considerate of others. That he needs to learn that things may not come easy and that he is going to have to work for what he wants and the hard things may take multiple attempts and lots of failure before he gets it right. That he needs to learn that it’s not all about him and to not be a selfish because selfish people usually turn into jerks and people usually don’t want to be friends with jerks. I told him that he is a terrific and smart kid and has great things in store but it takes a long time to figure out his place in this world and it’s our job to help him along that path.

Church is a good place to sit and think before making wide sweeping decrees that you may regret later. I sat through the service with my thoughts, served my brothers and sisters communion, let the music calm me down. Without really thinking about it I let the beauty of structure and ritual bring me back to center. By the time we were on our way home I had an idea but needed Dear Husband’s buy in.

My idea was to try, for one month (4 weeks), no screen time on Sundays. We all would take a break from the video games, the tv, the phone, the iPad, the computer. All of it. Dear Husband was on board with the caveat that he might need to check work emails every now and then if there was a fire to put out. We let them know that while all of those things are awesome, we felt like we needed on day where we did things together and with friends that involved a little more creativity than just looking at a screen. Harry took the news in stride. Addison however, wasn’t as keen. His reaction was to go to his room and hide under the covers. I let him pout for a little bit then softened the blow by making chocolate chip cookies (thank you neighbor who sold us the fundraiser cookie dough, you saved me by allowing me to be a benevolent ruler and offer up warm, gooey, comforting cookies without having to actually do any real work) We also decided to alter the rules just a little bit. Instead of all day long, we revised the no screen time sanction to 7:00 a.m. – 7:00 p.m. Because, you know, Downton Abbey.

As it turns out, no screen time Sunday wasn’t so bad. The pull of Instagram and Facebook was strong but I was able to stay away. I fought the need to let my friends know I wouldn’t be able to message them off and on all day but they were all just find without me for the day. Dear Husband normally uses Sunday to catch up on all the current events and sports related articles he doesn’t have time to read during the week. He reads them on his iPad so that was a conundrum and we’re still trying to find a loop-hole so he can enjoy his reading time and still play by the rules. Once Addison was fortified by cookies he discovered a room full of awesome stuff and was able to entertain himself and even created a new game for all of us to play. Harry who can entertain himself for hours with just a penny and a stick was fine with the whole thing.

Even though we started off strong I’m still a little unsure of how the rest of our little experiment will pan out. Keep me in your prayers that I don’t cave under the “I’m bored” pressure. Netflix and their endless supply of kid shows is a tempting and soothing balm to the boredom woes.