Three weeks ago Dear Husband emceed a beauty pageant. Yes, you read that right. How in the world did this come about? Well…Dear Husband is on the advisory board for his college fraternity. We live in the same town where we went to college and the chapter alumni board is always desperate for volunteers. Being the good guy that he is, Dear Husband helps out.

The Lambda Chi Alpha Miss White Rose Pageant is in it’s 25th year. Yup, it’s a “real” beauty pageant. The men of LXA put it on to benefit Big Brothers Big Sisters. Each sorority picks one freshman to participate. They needed a new emcee so guess who they called?!

I’m sorry for not having a better picture of Dear Husband in his tux.

Being the wife of the emcee has it’s perks. I got to read all of the girl’s bios the week before. There was one girl who I thought was the ringer. She is the reigning Miss OU and also holds the world record for most consecutive pirouettes. Seriously, she can do 36 pirouettes in a row (in tap shoes). Check it out if you don’t believe me.

Anyhoo – Dear Husband and I came up with a time filler if one was needed and I found myself a seat right up front. It was me and about 300 sorority girls. I tried to blend in by passing the time texting, updating Facebook and reapplying my lip gloss.

There were 11 contestants. Talent counts for a large percentage of the total score and took up most of the evening. 7 of them were dancers, 3 sang and 1 played the piano.

When this girl walked out on stage I thought she had it in the bag. She had pageant written all over her. She had the walk, the smile and the pose down. If there was such a thing as Toddler’s and Tiara’s 15 years ago this girl would have been on it and taken home the huge crown and cash award.

Here are our 11 lovely contestants

Dear Husband did an awesome job. He had jokes prepared and our time filler worked like a charm. He did a little psychic party trick and told everyone that he was going to select just one person out of the audience just by using his telepathic abilities. He had the entire audience stand up and proceeded to asked yes or no questions and had the “no’s” sit down. After a short series of questions he had it down to three girls still standing in the audience. He asked if one had any ties to the School of Music then it was down to two. He then said that one was from Texas and he had a winner! The audience genuinely seemed amazed. Then he asked if that girl was married…yes she was! He then asked “Are you married…to me?!” Yes! It was me all along. It got a huge response which I was amazed at. I was sure everyone could see through our little trick as it was clear I was not one of them.

Back to our pageant.

And the winner is…

NOT the world record holding, reigning Miss OU. It was the pianist. The second from the right in the picture. She was a incredible pianist and that really set her apart.

I hope the girl who I had my money on takes home a lesson from this pageant. She better come up with something more than an amazing tap routine if she wants to become Miss America. 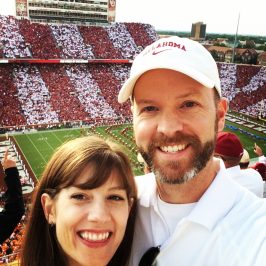 I love OU football.  I love going to the games and watching it on tv....

Just a few words…can anyone guess what is going on here? Related Posts via CategoriesOU...