Turner Falls!  We took Addison here last year and he has been begging to go back ever since.  The very first thing we did was drop Harry off with Dear Mother-in-law.  Turner Falls is a great place for family fun but NOT with a baby or toddler.  First of all it is way too hot to have a baby out in the sun and heat.  Secondly, you have to cross streams and rocks that are VERY slippery to get to the swimmin’ hole.  Not something you want to do with a small child.  I saw a guy bite it on the slippery rocks because he was trying to help his little toddler get across a shallow pool.  Just so you understand me…do not take a child under the age of 3 here.

Now that we have that out of the way it’s time for the fun.

We got there at about 10:00 a.m., a perfect time to beat the crowds.  There were only one or two other families there at that time.  We swam for about 2 hours, by noon it was packed and by that time we were ready for our picnic lunch.  There is a little place to get pizza but a slice of piping hot pizza doesn’t sound very good on a 101 degree day.

The twisty slide was new this year.

Dear Husband and I made it a rule that one of us had to be at the bottom of the slide when Addison was doing his thing.  Good thing too…when it started to get crowded one kid wasn’t watching to see if it was clear to slide and landed right on top of Addison.  We had to take a little break after that but it wasn’t long before he was after it again.

Who is that man with the farmer tan?  Dear Husband, that’s who!

The water was pretty low compared to last year.

Last year most of that rock was under water.  The low level made crossing this little stream to get to the diving board a little easier but it was still very slippery.  This is about where I saw the guy w/ the toddler bust his butt.  Thankfully the toddler was fine and had no idea his dad was nursing a bruised tail bone, head and ego.

Turner Falls is a state park and they charge admission per person to get in.  Besides the main swimming hole there are the actual falls (which you have to take a small hike to get to) and a cave to explore.  There is camping but I can’t imagine spending the day in this heat and then sleeping in a tent when the low is in the 80’s.

Another successful trip to Turner Falls.

Easter is right around the corner.  Time to get your hunt on! This past weekend...

It’s pretty amazing how much cardboard we use day to day. This is a picture... 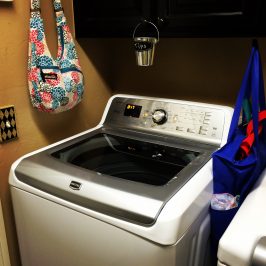 This is my maternal Great-Grandmother. We called her Ga-Maw.

Mid June and the “I’m bored” syndrome has already set in.  It’s time to pull...