Let’s talk about picky eaters. If your child will eat anything set in front of them without question or fuss then you might as well just stop reading and send this to someone you know who lives with a picky eater.

Look at me…sittin’ in my chair so nicely, doing some light reading, eating puffs and whatnot. I’ve got a surprise for you and you’re not gonna like it…and I’m not talking about the surprise in my diaper…

Addison was a champion picky eater. I say was because he come a long way and is making a big effort to try new things…or else he would starve. Don’t misunderstand me, his case of pickiatitis has not been cured but we’ve donated a lot of time and money toward research to find a cure…

Looking back I now know that a large part of his pickiness was in part due to Sensory Processing Disorder. Certain textures were unbearable to him and he has an enormous gag reflex. Throughout toddlerhood and well into the preschool years it seemed like he at the same thing every single day. At dinner time I would fix a normal dinner for Dear Husband and myself and then I would fix Addison’s dinner of chicken nuggets, carrots, yogurt and fruit. Doesn’t sound too bad (except for the nuggets part) however, it was the same everyday and I was sure he was not receiving the proper nutrition he needed and in some way was malnourished. You have no idea how much it pained me to serve him his own special meal which included nuggets. I always said I was never going to be the mom who ___ fill in the blank. Well guess what sweetheart, never say never because you’ll live to regret it.

Here is what I did to overcome our ridiculous dinner time habits. Before I continue let me just say that I’m not trying to give a picky eater solution for desperate parents out there. No two picky eaters are the same. This is what worked for me.

Sometime in the late preschool years (around age 4 or 5) I decided that I had had enough. We had been through Occupational Therapy to address his SPD and were making great strides in getting it under control. If I had tried this anytime before this age my efforts would have been futile. But I felt the time was finally right and I was putting my foot down. One day I decided that I was not going to buy another bag of frozen chicken nuggets (except that I have bought frozen chicken nuggets since then). I made it my personal mission that Addison would eat what we’re eating.

It started with baby steps. For a long time he had to have at least one element of the real meal on his plate and eat it. I slowly added more regular food and less go-to food. Then we hit Kindergarten. He was a big boy now and we were going to all eat the same thing as a family if it killed me. I announced that what was on his plate was dinner and there wasn’t going to be anything else to eat that night. If he didn’t like it, well, to bad so sad.

To some (like my mom) this might sound harsh. Let me just say that I don’t put down a heaping plate of brussel sprouts in front of him and expect him to choke any of it down. I go to a lot of effort to fix things that I think we will all like and that I will feel good about serving. Our recent need to monitor screen time has helped a lot in our campaign to clean the plate.

If you have a picky eater, take heart. I’m here to listen to your woes.

Out of the blue Addison wants to set up a lemonade stand (this request happens... 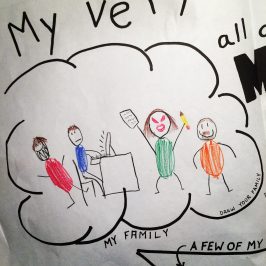 Recently I was cleaning out Addison’s backpack.  A dangerous past time but it must be...

This is a conversation that took place over dinner this week. Addison:  There was something...

It’s that time of year again…VBS.  Last year we had a great time learning what...