Long ago in a land far, far away there was a girl who had a career.  Okay, actually it was about 2002 and it was in Los Angeles, CA. Dear Husband and I were living life large in B.C. (Before Children).  It was a time where we went to the movies and ate out often.  It was a time when I wore Guess slacks, Ann Taylor sweater sets and high heals.  A time when I had Starbucks every morning, Coffee Bean in the afternoon and lunched at trendy cafes in Santa Monica and Beverly Hills.

One particular afternoon my boss and I were having lunch at a trendy cafe in Santa Monica on 17th Street.  (We were too good for Santa Monica Blvd. That’s where the tourists go.)  We had a great lunch and as we were getting up to go my boss mentions to me that Michael Keaton is just a few tables behind me.  I turn around and what do you know, right there in front of me is Michael Keaton.  Because of the way the tables were set up I had to walk directly towards him to leave the restaurant.  I put on my most “I could care less that a huge celebrity is right here” face (because that’s what you do in L.A. God forbid you actually get excited and make a fool of yourself) and start walking.  I look directly at him and just at that same moment he looks up at me.  For one brief moment our eyes lock.  Everything else faded away and for a slice of time it was just me and Michael in the restaurant.  Something unspoken yet magical passed between us and then just as quickly as it started our moment ended.  I made a right turn and headed out the door.

Out on the side walk in the harsh reality of the afternoon sun I stopped to catch my breath.  The first thing out of my mouth…”That…was Batman”

Dear Husband likes to tease me that Michael Keaton is my celebrity boyfriend and also likes to give me a hard time that Batman was the first thing that came to mind on that sunny Santa Monica day.  Some of Dear Husband’s favorite movies star Michael Keaton; Mr. Mom & Multiplicity, just to name a couple.  Christian Bale was an amazing Batman but my first impressionable introduction to Batman was in 1989 and for me Michael Keaton will forever be the most eligible bachelor, Bruce Wayne.

Michael has moved on to voice overs for Pixar and I have moved on to family life in Oklahoma.  But we will always have the 17th St. Cafe.

I’m a woman on a mission.  A mission to figure out ways to cut our...

It’s pretty amazing how much cardboard we use day to day. This is a picture... 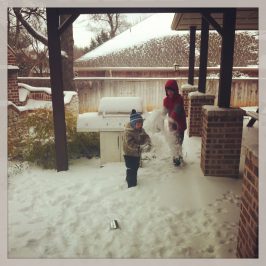 It’s a snow day!  Even though we live in a state that regularly gets freezing...

You may remember that we got Addison a trampoline for his birthday.  It has been...