Tuesday night Addison and I had a double date with a mommy friend of mine and her son.  We went to the Civic Center in OKC to see Cathy Rigby is Peter Pan.  I don’t know what I was expecting but this performance far exceeded my expectations.  Cathy Rigby has still got it going on.  During the first scene set in the nursery she was bouncing and tumbling around the stage, balancing on top of things, showing off how flexible she is all the while being a perfect Peter Pan.  I kept thinking to myself, “When is she going to get hooked up to cables.  She is going to have to go off stage or have some discrete stage hand hook her up.”  When out of nowhere she took flight and what a flight it was!  Cathy’s acrobatic skills combined with the Flight Director who controlled the cables made for one very impressive flight sequence.  Addison sat in rapt silence while his friend nearly hit the roof with excitement.

At intermission I was afraid the boys would be too tired to carry on through the second act.  On the contrary they were raring to go and were impatient for intermission to be over so they could see what was to come.

At the top of the second act Peter, Wendy, the Lost Boys and the Indians did an incredible dance number.  It combined dancing and percussion that kept getting faster and more frenzied until the audience was left cheering.  The boys thought it was hilarious that the song they sang during that number is called Ugg-a-Wugg.

The pirates added quite a bit of comical release as well as an exciting sword fight between Hook and Peter.  Addison’s friend who was with us is really into pirates right now so he could hardly contain himself with all the sword play.

When I got home and regaled Dear Husband with the highlights he couldn’t believe that we got to see Cathy Rigby.  He remembers seeing her as Peter Pan in the 90’s and remembers her best as an olympic and world-class gymnast from the 70’s.  The 70’s!

Thank you to Celebrity Attractions for bringing Cathy Rigby to Oklahoma City!  Here’s what they have to say about the show:

If you have been thinking of introducing your little one musical theatre, Cathy Rigby is Peter Pan is the perfect place to start!

pictorial highlights from the evening… Have you seen the show?  Do you remember Cathy Rigby as Peter Pan?  As a gymnast?  I’d like to know what you think. 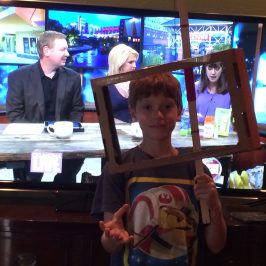 If you are here because you saw me on Oklahoma LIVE! and decided to actually...

Mid June and the “I’m bored” syndrome has already set in.  It’s time to pull...

This week was Vacation Bible School at our church.  This ain’t your Grandma’s VBS.  For...

We have entered a new phase in movie watching at our house and it makes...