End of the year always winds down with a birthday for little ol’ me.  Growing up, having a birthday right after Christmas was always tough.  Sometimes my mom would plan ahead and have a party in November.  Sometimes we would wait and have a party of three.  Most of the time we were visiting my grandparents in Louisiana.  Birthdays are fun but I’ve come to not to get overly excited.  I’m also very surprised to meet so many people who share a b-day with me or are just a few days away.  I have two friends that I’m birthday buddies with, my sister-in-law’s birthday is the day after.  In fact I have 6 family members that have birthdays within a month of mine.  It kind of messes with our Christmas budget.

Dear Husband tries really hard to make it special.  This year, despite a less than celebratory start (we attended Dear Husband’s Grandad’s funeral.  He was 89 and had very recently been diagnosed with Pancreatic cancer so it was a blessing that he was called home rather than linger and suffer) it was a good day.  Dear Husband surprised me with a new laptop.  Woohoo!  All that saving and penny pinching pays off.  Not immediately, but it eventually pays off.  After the funeral we hightailed it home so we could make it to the fancy pants theater to see Les Mis.  Heated/reclining seats, check.  Coke float and snacks, check.  Kleenex, you betcha. Thanks for the amazing surprise sweet stuff. Can we take a short break to talk about how amazing this movie is?  When I first heard about it I kept my expectations low and thought the whole record-the-actors-singing-while-you-act rather than pre-record in the studio might be gimmicky.  I stand corrected.  So powerful.  Hollywood has tried in the past to turn smash Broadway musicals (ahem, Phantom) into a box office hit and we all know how that turns out.  They hit this one out of the park.  Oscar might as well just go ahead and give all of the sound mixing, sound editing, make up, costume and technical awards to them right now.  While they’re at it they should just go ahead and give Hugh Jackman his Oscar and name him man of the year to boot.  Oh, just go ahead and give Ann Hathaway her award too because sister can get it done.  Russell Crowe…ehh.  I’ll give him and “E” for effort and trying to keep up with the professionals.

The festivities continued the next day w/ brunch for my Sister-in-law’s b-day at the Colcord Hotel in downtown Oklahoma City.  Addison declared that his favorite pancakes are either the fancy hotel restaurant or IHOP.  He likes to keep it real with both ends of the spectrum. Later that night it was girl time at BFF’s kid-free zone with amazing food and libations.  She loves to cook and really showed her stuff with baked brie, spinach-artichoke dip w/ fancy cheese, shrimp cocktail, and a highly addictive cheesy bread that she likes to call “bread crack” and now I know why. Good times with some of my girls.  Thank goodness for good girlfriends.

So, it was a great birthday.  Looks like 30-something will be a good year.

Three weeks ago Dear Husband emceed a beauty pageant. Yes, you read that right. How...

Earlier this month we threw a 1970s themed party.  Among the polyester, platforms and mustaches...

It’s really easy to get caught up in the day to day. It’s easy to... 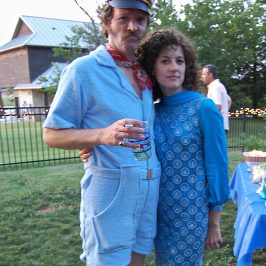 This summer Dear Husband turned…ahem…40.  To celebrate this momentous occasion we threw a 1970s themed...