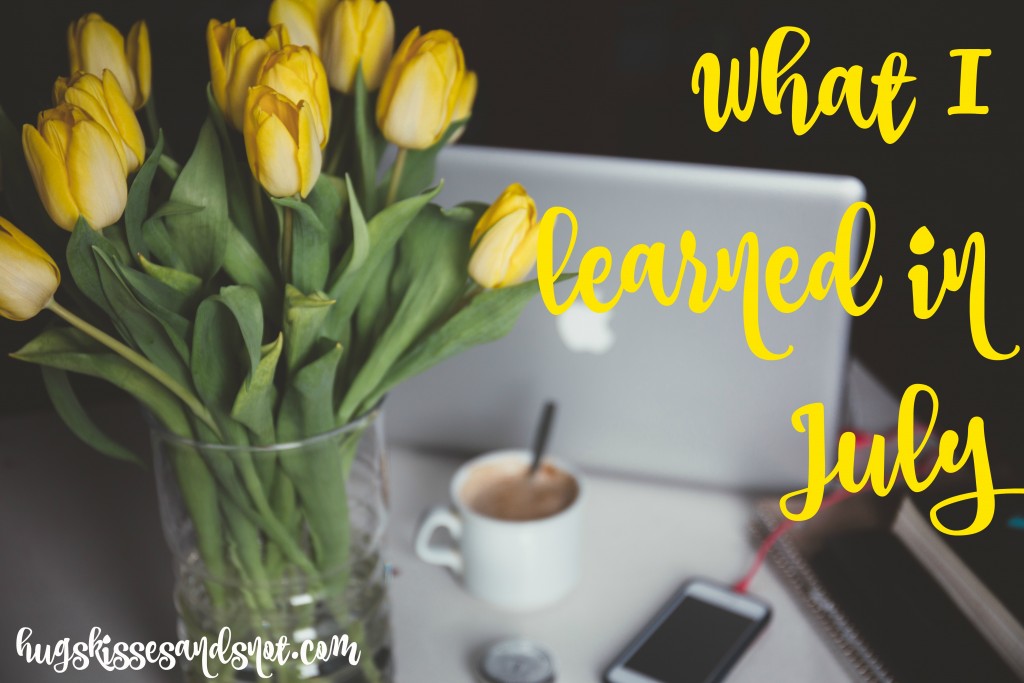 I’m not going to say that what I learned in July was that summer slips by really quickly. That everything is moving too fast. That I don’t know where the time has gone.

We all know that to be true so it’s not a new concept to learn.

What I learned in July was that it is okay to move slowly. Realy, really, really slowly.

I learned that it’s okay if they boys spend all day watching tv or playing video games. Before long they will be in school all day and shuttled around to after school activities and doing more homework than is necessary for an 11-year-old to do. In just a few weeks life will be busy and moving fast.

So for right now I like moving really slowly.

Their brains won’t rot out and they won’t forget everything they learned. When I start to feel guilty about all the screen time, I take them to the library or the water park to balance it out.

I’ve learned that we don’t have to have something planned and scheduled every single day. It won’t be long before we are all over-scheduled and hopefully we can look back fondly on our under-scheduled July.

In full disclosure…in the past 15 months (give or take a few months) I received two speeding tickets. I really like to get to where I’m going quickly. My dad, who is an expert at getting out of speeding tickets, showed me how to keep the first one off of our insurance. That trick didn’t work for the second one. In an effort to keep our insurance from going up, Dear Husband and I agreed to let our cars be monitored for three months. A device in our cars keeps track of how quickly we start and stop. I’m not sure if it knows when we go over the speed limit but I always have an impression of big brother watching and critiquing my driving so I have been trying to obey the law. At first it was frustrating and unnerving. Finally, I realized that I just need to slow down.

I’m not good at starting and stopping super slow. That part makes my anxiety go up. But slowing down to the speed limit has forced me to be more laid back in my attitude about where we are going and when we are going to get there. I know I’m not the only one who speeds because now that I’m driving the speed limit around town people are passing and tailgating me like I’m an 85 year old woman out for a Sunday drive who can hardly see over the steering wheel.

Rather than get anxious at how slow I have to go or get mad at people zooming around me, I have learned to let it go.

We will get there when we get there.

I hate HATE being late. When I started trying to slow down my driving I worried that we would be late to places or have to rush to leave earlier. However, most of the time, we get there at the same time than if I had raced. Turns out my mom and Marg Simpson were right: Slow and steady wins the race.

I don’t know if I will continue being a grandma driver. I do know that I’m not looking forward to the rat race that the new school year brings. I’ve really enjoyed slowly floating along this lazy river of summer.


On the first day is Christmas my true love gave to

Christ the babe was born for you.

Today’s outfit is brought to you by; I’ll-wear

Today’s outfit is brought to you by; treat-yours

What’s on your Thanksgiving menu? Ours is a bit

This pb&j “pancake” made a fun weekend treat t