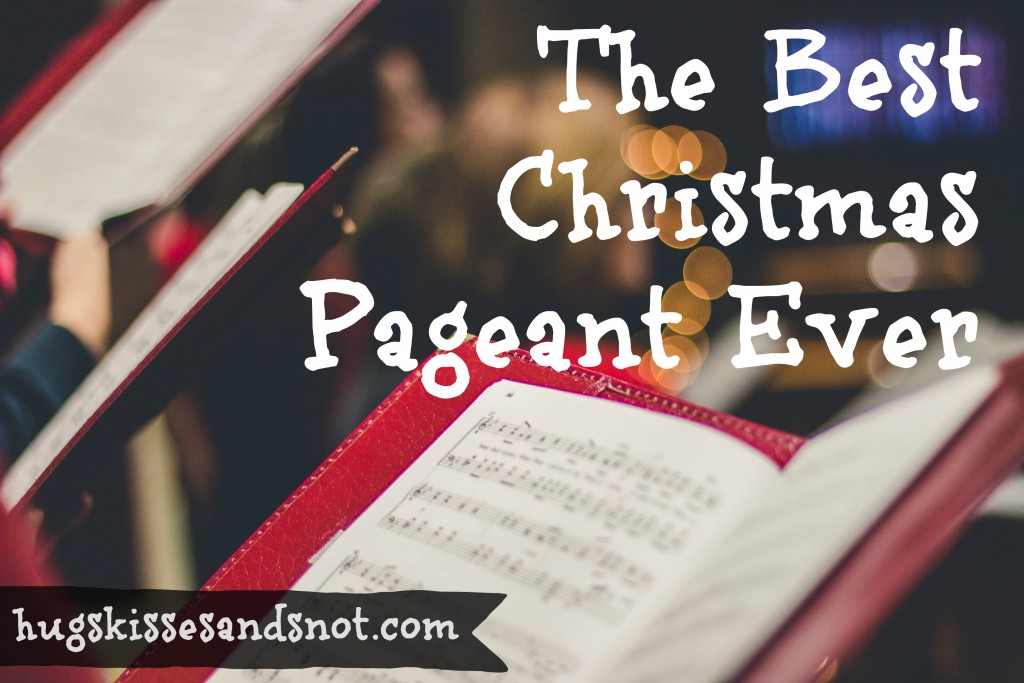 We have been participating in our church’s Christmas pageant for ten years. It started in 2007 when we moved home and our oldest son, Addison, was barely three. He dressed up as a barn animal with the other nursery age children and sang Away In A Manger. I did my best to create a camel costume out of a brown Old Navy track suite, a lot of felt and pipe cleaners, and stuffed his baby pillow up the back of his hoodie. It was precious. One of the pre-school years, my husband worked and worked with him to make sure he could stand in front of the church without picking his nose and keep his hands out of his pants. After a single verse of O Little Town of Bethlehem, he delighted the crowd by yelling out ” Hey Daddy, how did I do?!” to seek approval from his coach.

Once he graduated up to elementary school, he stood with the other children ranging in ages from Kindergarten through fifth grade and sang songs outlining the Christmas story. Some years the kids wore biblical costumes (aka, fabric in various shades of brown and tan draped around the kids and belted with rope) and some years it was velvet and plaid dresses or red argyle sweaters and button-up shirts. Either way, it’s always cute.

Once our younger son, Harry, came along, he was put into an angel costume with the other preschoolers and sang Hark, The Herald Angels Sing to an audience enraptured by the cuteness overload. His blond hair, blue eyes and chubby face topped with a silver tinsel halo made you want to weep it was so adorable.

To Addison’s relief, he is now too old to participate in the Christmas pageant. But to Harry’s delight, he is right smack dab in the middle of it and all the accolades it brings.

For ten years we have been delighted by the Christmas dresses, the shenanigans, and toddler angels and sheep. For ten years, my best friend and children’s choir director, Christine, has been leading these kids through readings of Luke and songs about angels and barn animals. For ten years parents and grandparents have been delighted by the hilarity that ensues when you plop fifty little kids in front of a crowd and expect them to stand still for thirty minutes. Spoiler, they do not stand still for thirty minutes.

Each year I can’t wait to see what crazy thing some kid will do or how many noses will be picked simultaneously and each year does not disappoint. But this year…this year took the cake. If it could happen it did. It all started when one precious little guy in suspenders and a bow tie had his shirt completely untucked. The parent of this dapper little fellow couldn’t take it and discretely tried to pull him aside to tuck in his shirt. I don’t blame that parent one bit. If it were my kid up there, in front of three hundred people looking like he just came from a gentleman’s wrestling match, I wouldn’t have been able to let the shirt go either.

Next was a second grader who decided she needed to tell Christine something in the middle of directing a song. She whispered something in her ear while Christine is trying to beat out a 4:4 pattern then skipped to my Lou up the aisle on some mystery errand. She then promptly returned with what looked like some sort of towel or rag that she then used to wrap and unwrap around her hand for the next thirty minutes. After that, it all slowly started to fall apart in the most outstanding way.

After that, it all slowly started to fall apart in the most outstanding way.

No less than three children needed to go to the bathroom. Out of obedience to their beloved choir director, they asked her permission. Again, in the middle of a song, she simultaneously conducted a choir and sent each one up the side aisle to the bathroom. One precious kindergartener spent the entire time tucking and untucking his shirt and spinning his belt around his waist. The time to discover if one can touch their knees on the inside of their pants is clearly during a Christmas pageant when mom and dad are only feet away but can’t really do anything about it. The little girl next to him would not be moved by his shenanigans and stood like an angelic statue only moving her lips to sing and her eyes to give him the side-eye. If she can concentrate like that at age six, she should consider a career as bomb diffuser for a SWAT team. Nothing will break her composure, nothing.

It all came to a climax when one girl lost a tooth during a song. She presented the tooth to Christine for safe keeping then returned to sing her heart out. Christine took it and without missing a beat, continuing to direct the choir, turned around and handed the tooth off to a mom sitting in the congregation.

The timing of this tooth was either incredibly lucky or unlucky (depending on how you look at it) as immediately following the dental extraction; it was her turn at the mic to say her lines. While she waited her turn to proclaim that Jesus is indeed the light of the world, her gums started to bleed as they do immediately following a pulled tooth. Everyone close enough to glimpse her cherub face started to wonder if she had somehow acquired red lipstick and was applying it on stage. Nope. That would be blood. Amazingly, this precious angel delivered her line not once, but three times (as indicated in the script) with blood beginning to splatter her dress. As soon as her time to shine at the mic was over, a dad who was sitting on the second row took her by the (bloody) hand and walked her up the aisle to the back of the church to clean off her mouth and find her mom. Meanwhile, the instrumentalists were placed where they could not see the action and were oblivious to what was going on. But don’t worry, one of the boys on the top row turned around so he could pantomime a tooth being pulled so that the pianist and his percussion friends wouldn’t be left in the dark. Like the shepherds in the field, the excitement of the events unfolding before him was too much to not immediately share the good news with those around him.

It wasn’t long before two girls started to feel faint. One because of the blood and the other, because she had been standing with her knees locked for too long. You guessed it, both girls came down to tell Christine about the blood and that her vision was starting to go dark and she needed to sit down.

Despite the distractions, the Christmas pageant was lovely and some said one of the best we’ve ever had. I can’t think of a better way to begin a season celebration and of anticipating the birth of Christ than with this community of faith. There I sat, nestled in the pew between my family and my brothers and sisters in Christ as we raised our voices to proclaim joy to the world! Our Lord is coming and has come. The best news of all is that He has always been here, squeezed in the pew beside me, even as we count down the days to his birth. These cold winter days are just a reminder that joy, peace, hope, and love are always available to us in the calm and in the chaos.

These cold winter days are just a reminder that joy, peace, hope, and love are always available to us in the calm and in the chaos.

Watching and participating in this three-ring circus of a Christmas pageant is just the way I want to start the holiday season. The beauty and the mess, the mistakes and effort tell the story of real life. I look around me and I see parents and grandparents who are all trying their hardest to raise good kids despite what life throws at us. We are all in it together, doing the best with what we have been given. Carrying on, continuing to conduct, determined to beat out a 4:4 pattern despite the interruptions. I think about the Christmas story the kids told us that night…how Mary and Joseph made the long, hard journey from their home to Bethlehem. I think of their ancestors who went before them, wandering in the wilderness, trying to find their way home. I think of all the generations of families that lead up to me and mine and the thousands of Christmases that have been anticipated and celebrated. Christmases full of broken hearts, disappointments, joy, celebration, loss, and hope. It all happened then and it is all happening now.

So here we are, anticipating God’s most precious gift, in this beautiful and chaotic mess of a life. Gloria in Excelsis Deo!