Monday I was a guest on The Diane Rehm show along with Deb Perelman from Smitten Kitchen.  And by guest I mean I called in and they took my call.  Diane Rehm had a blogger on her show, how could I not call in?!  I sat in the Target parking lot waiting to see if she would take my call.  The next thing I knew I heard Diane say “let’s go to Norman, Oklahoma.  Stephanie, you’re on the air.”  I’m not exactly sure anything I said made one bit of sense but I made sure to say that I was a blogger and did she have any advice?  I was really hoping that Diane would be charmed in the 8 seconds I was on the air, ask the name of my blog, become and fan and next thing you know she has booked me as a real guest, not just a call-in listener.  That has not yet happened. humph.

If you want to listen to the entire segment you can check out The Diane Rehm show website.  There is a “Listen” button near the top left.  Jump to the 35:28 mark for my call.  Not that I’m over analyzing it or anything.

Anyhoo, I left the radio show with a renewed spirit to cook real food for my family.  Here’s what I came up with.  (Food snobs might want to close your eyes at the second ingredient.  You may not consider canned biscuits “real food” but I call them manna from heaven.)

Heat olive oil in a large skillet or dutch oven.  Pat chicken dry and season with s&p.  Brown in skillet in batches, set aside.

Add butter to skillet, saute onion, carrots, celery and potatoes until onions are soft.  About 3 minutes.

Add vegetable broth and half & half, bring to a boil.  Reduce heat to a simmer.  Add peas and corn.  Return chicken to skillet, cover and simmer for 30 minutes.

Cook biscuits according to package.  Just before serving, stir in corn starch to thicken sauce.

Serve chicken and veggies over biscuits.

Now that you’re ready to make this I’m going to share a secret with you.  This was seriously delicious…and my 8 year old hated it.  Well, he liked the chicken but had to choke down the rest.  Even the biscuit.  THE BISCUIT.  He spent the entire time at the dinner table hemming, hawing, groaning and moaning.  I told him that if I heard one more big sigh he was going to his room.  I was so annoyed that I almost pulled a Real Housewives of NJ move and over turned the table.  I refrained.

Recently I felt the need to make pumpkin pancakes.  I know it’s 106 outside and...

I received a pizzelle press for Christmas or my birthday last year (I always forget... 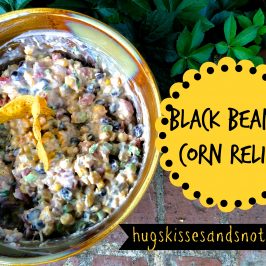 Let me first start by saying that I’m calling this Black Bean and Corn Relish...

Homemade granola…just saying it makes me feel all…granola-y.  I wonder if I can find my...

I will admit that I have purchased, cooked and consumed Stovetop Stuffing in my life....

Has anyone else noticed how brussels sprouts are the new “it” veggie?  Pioneer woman has...