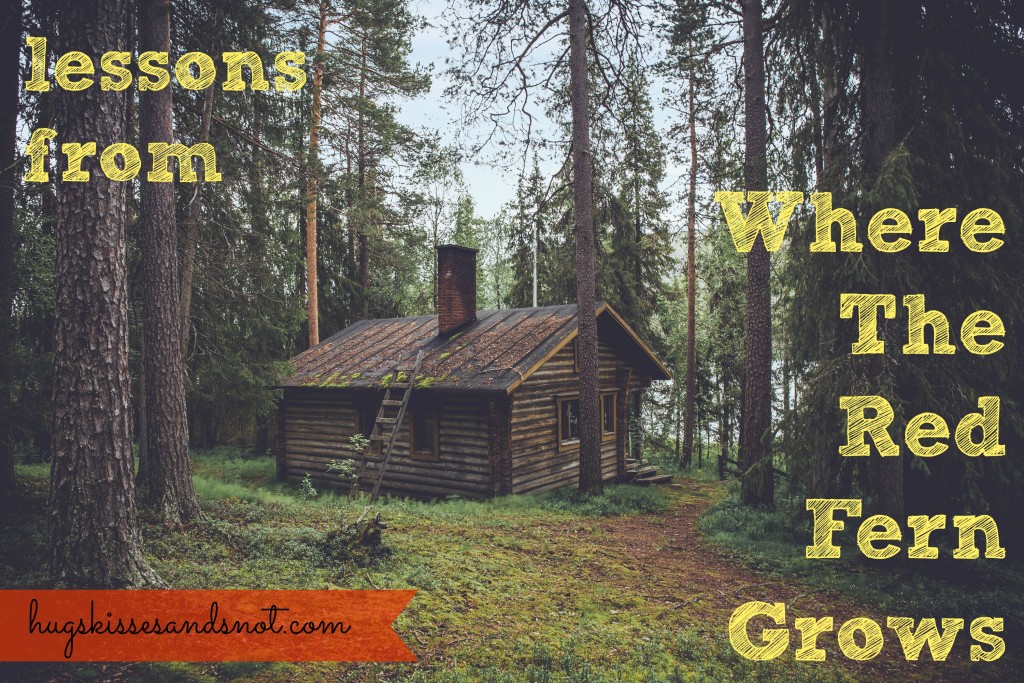 Earlier this year I found my childhood copy of Where The Red Fern Grows at my parent’s house. I brought it home to read to Addison because it’s a classic and I feel like it is my duty to introduce him to the books that will stick with us for a lifetime. I don’t know how much longer he will want me to read out loud to him so I will continue reading until he rolls his eyes and tells me I can stop already. 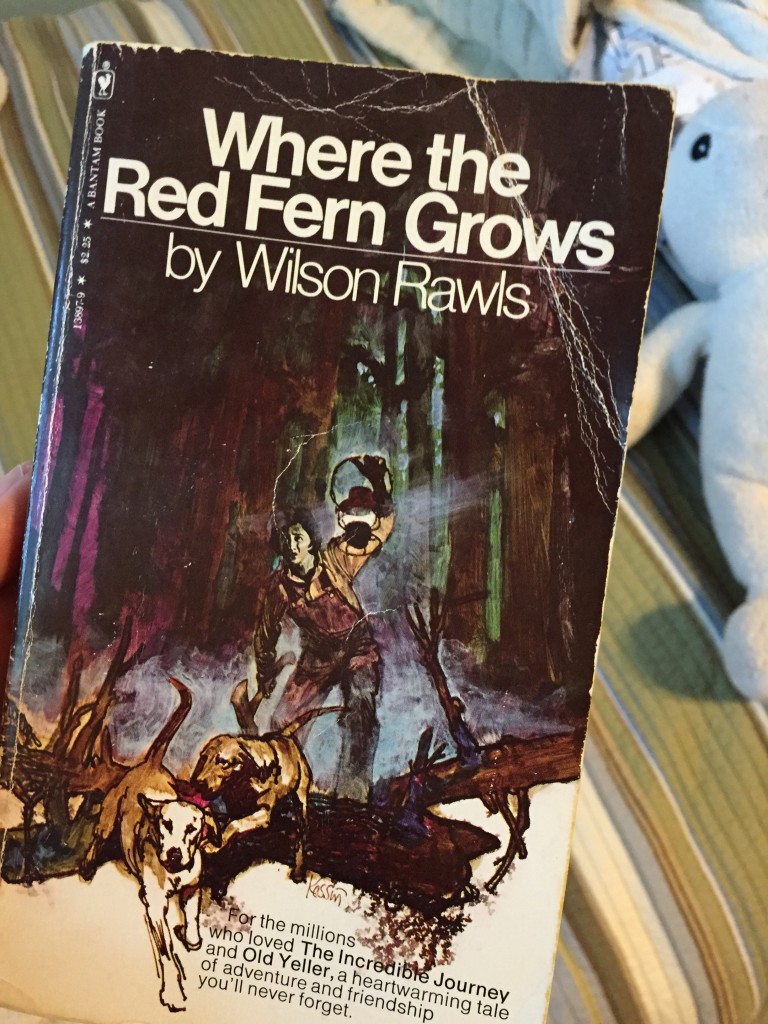 It has been over 30 years since I read Where The Red Fern Grows so I completely forgot that it takes place in Oklahoma. This was a fun little discovery since it mentions places we know and towns we can visit. I’ve already made a mental note to take a little trip to Tahlequah this summer.

I knew the premise of the book and its sad ending but I couldn’t remember exact details. 30 years is a long time to remember details from a book.

Spoiler alert: the dogs die. In a graphic and incredibly heartbreaking way.

I bawled my way through the last two chapters. I mean; snotty nose, tears streaming, choking back a sob, crying. At the first big sniffle, Addison looked at me sideways then had to turn away. I think he was embarrassed at how emotional I was getting. It didn’t help that our own dog was dutifully lying on the floor near me and a rain storm was raging outside. Have you ever tried to read out loud while crying? It’s pretty pathetic. My voice got all high and squeaky as I sobbed my way through. At one point I had to stop to compose myself and my eyes scanned the lines ahead and I saw the word entrails and groaned. It was at that point that Dear Husband left the room. 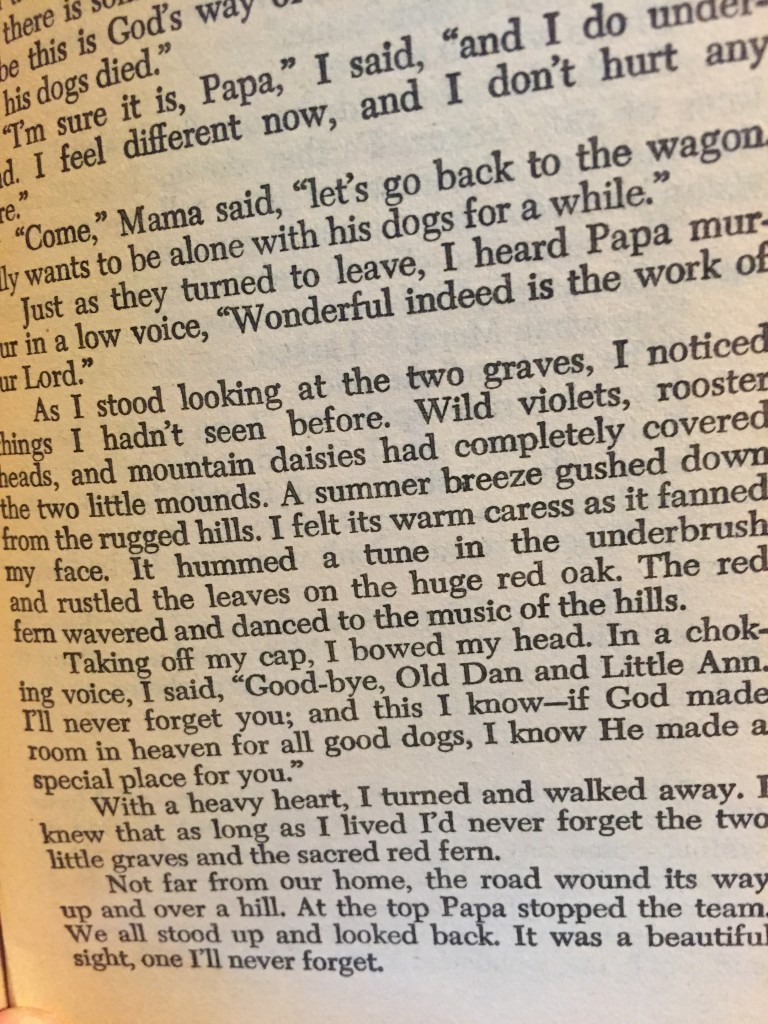 Another detail that I forgot about halfway through the book was a minor child character accidentally falling on an ax and killing himself. As I was reading that scene out loud, I wondered if this was eleven-year-old appropriate. I mean, a bully impaling himself on an ax as his little bully brother looks on in terror isn’t exactly sweet nighttime material. Sweet dreams! (as you contemplate what it might be like to witness something so gruesome as death by ax in the stomach) I continued to read and thought, yes, this is eleven-year-old appropriate. On a superficial level, it’s a good lesson to never run with an ax. It’s all fun and games until someone suffers a mortal flesh wound. On a deeper level, I started to think about how fiercely we try to protect our kids from life’s hardships yet have no problems with violent video games or movies. If my boys are going to be in this world and exposed to the ugliness that we create, then my preference is what literature can teach us about violence rather than mindless, desensitizing violence blasted across the screens.

I’m not sure if parenting was this complicated 30 years ago but I feel like we are traversing a minefield here. Maybe kids and the dangers of the world haven’t changed that much. Maybe our parents just weren’t as hyper-aware as we are or on as high alert to the dangers lurking around every corner and on every label. Society tells us to give them what they want but the parenting books say to set firm boundaries. We feel a tug of war between being a parent and being a friend so we easily cave in and give them what they want, even if we know deep down that it may not be the best idea just so that we don’t have to be the bad guy.

We have become a parenting generation that has graduated from being helicopter parents, hovering over our little ones to make sure they don’t scrape a knee, to bulldozing away anything that will be a challenge. Intervening at the slightest sign of struggle and demanding a fair playing field so that our child doesn’t have to truly work to achieve a goal and expecting accolades for a mediocre performance.

Now, I realize that I am painting in very broad strokes here. Not all parents are bulldozer parents. But when we have students entering college and suffering from depression because they don’t know how to write a paper and handle the workload and parents who call professors on their child’s behalf because a poor grade was given; something isn’t right. When colleges have to create policies and positions strictly to deal with overbearing parents, we have to start wondering what is going to happen to these kids when they enter the workforce. Or rather, what is going to happen to the workforce when these kids enter it?

I don’t have all the answers. I have hardly any answers. I’m just fumbling my way through this parenting thing like the rest, hoping I don’t do too much damage.

Lessons from Where The Red Fern Grows came at the perfect time in this chapter of bumbling through parenting that we are in. Addison is the same age as the main character but they could not lead more different lives. Billy is poor hillbilly who doesn’t seem to be aware of the meager life his family leads. Like most boys he has big dreams and schemes of ways to get his heart’s desire; two hunting dogs. When he asks his parents to buy what he wants, they tell him they can’t afford it and to stop asking (a concept that would be foreign for many children). Since he won’t take no for an answer he figures it out for himself. He works for two years to earn $50 to buy the dogs he wants. For two whole years, he is relentless and won’t give up on his dream.

I can’t even imagine my son working and saving for something for two years. After begging a pleading for the newest gadget he gives up in just a few months if his demands aren’t met. There is always talk of earning money to get what he wants but never any follow through. The comfortable life we lead and assurance of Christmas and birthdays has eliminated any sense of urgency or burning desire to acquire items for himself. Recently Addison wanted a new computer game. He admitted that he wasn’t really down with doing chores to earn it and he would just dip into his money box for the $20. I told him that yes, he could just give me the $20 or we could go about this a different way. He could earn the game from me by doing a book drive around our neighborhood for the local Boys and Girls Club.

A heavy dose of abundance guilt worked and he pulled his wagon all over our neighborhood asking for book donations, honing his solicitation skills and learning to control his fidgeting body along the way. Now, I’m not saying this to puff up my chest and make myself look good. I constantly cave in and get my boys things they ask for. But this method worked for us this one time. My prayer is that it gave him some sense of work ethic that was lacking before. To be honest, the lesson may have been completely lost on him. Who the heck knows what goes through an eleven-year-old brain? Hopefully, this lesson combined with the tender message of devotion from Where The Red Fern Grows planted a seed of knowledge that there is more to this life than our own selfish wants and desires.

I feel like parenting is like playing darts in a crowded room with a blindfold on after having been spun around three times. You toss something out there hoping to hit your mark and not do any damage along the way. Thankfully, getting hit with a book is a lot less painful than a dart.