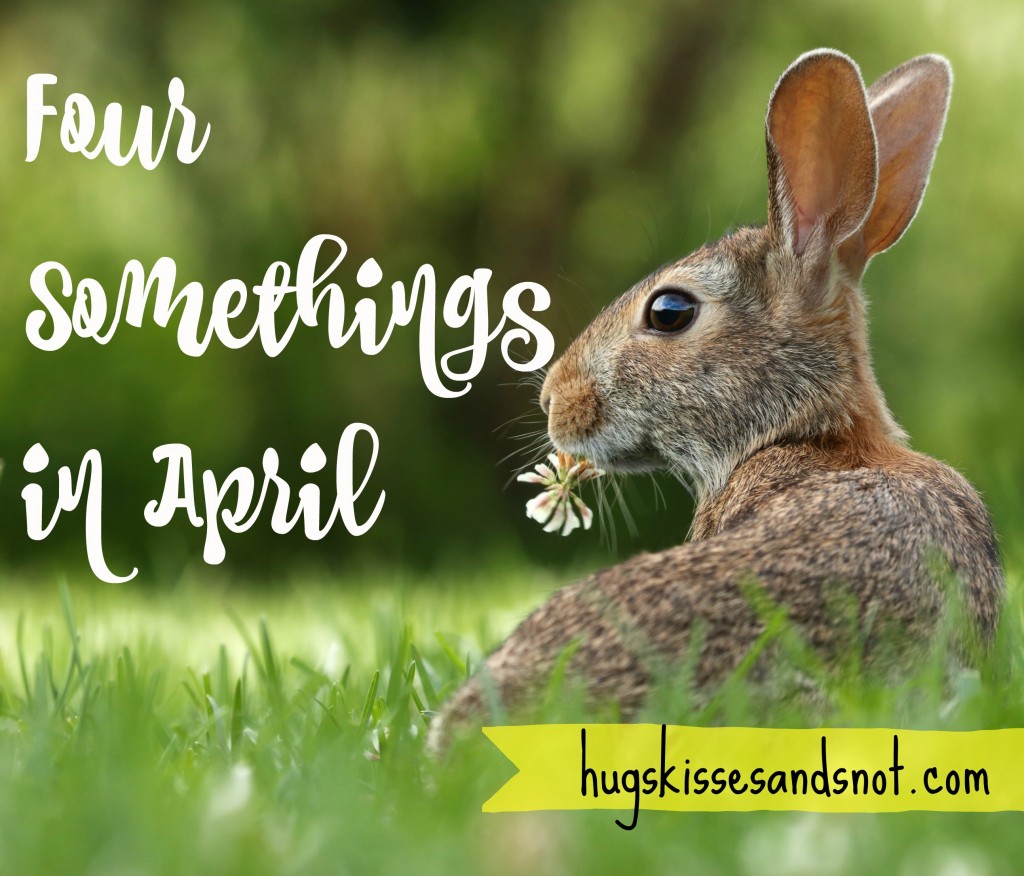 May is in full swing but in an effort to maintain some sort of writing schedule and accountability, I’m still thinking about April. Each month my friend Heather shares four somethings that she loved or learned and offers a space for writers to do the same.

Apparently there is this thing called Hunter and women are wild for their rain boots. I have been living under a rock and had no idea Hunter rain boots were a thing I couldn’t live without. However, they run about $120. That’s a little rich for my thrift seeking blood. Then one very wet weekend I was in Academy Sports buying rain boots for Harry when I saw shiny black rain boots for women for only $25. They don’t have the Hunter label in the front so all the world can see you are super hip and with it when it comes to rainy day foot wear, but they keep my feet dry the two times a year I need them.

Okay so side by side, the Austin Trading Co. boots do look a little squatty and not at sleek at the Hunter boots but in person they are just fine. They are rubber boots for-goodness-sakes!

Last month I listened to the audio version of To Kill a Mockingbird on Audible with the boys. I highly recommend rereading this or listening to it. The one we listened to is read by Sissy Spacek and her performance is outstanding. She reads all of the characters beautifully and brings each one to life.

In chapter 14 Jem and Scout attend church with Calpurnia. After the experience Scout is intrigued that Calpurnia has an entire way of life all her own and foreign to Scout’s way of living. She questions Cal as to why she speaks differently among her own people at church than she does around white folks.

That Calpurnia led a modest double life never dawned on me. The idea that she had a separate existence outside our household was a novel one to say nothing of her having command of two languages.
“Cal,” I asked, “why do you talk n-talk  to the – to your folks when you know it’s not right?”
“Well, in the first place I’m black-”
“That doesn’t mean you hafta talk that way when you know better,” said Jem.
Calpurnia tilted her hat and scratched her head, then pressed her hat down carefully over her ears. “It’s right hard to say, she said. “Suppose you and Scout talked colored-foks’ talk at home – it’d be out of place, wouldn’t it? Now what if I talked white-folks’ talk at church , and with my neighbors? They’d think I was puttin’ on airs to beat Moses.”
“But Cal, you know better,” I said.
“It’s not necessary to tell all you know. It’s not lady like – in the second place, folds don’t like to have somebody around knowin’ more than they do. It aggravates ’em. You’re not gonna change any of them by talkin’ right, they’ve got to want to learn themselves, and when they don’t want to learn there’s nothing you can do but keep your mouth shut or talk their language.” (emphasis mine)

Cal’s wisdom has been rattling around in my head ever since I heard it. It feels as relevant today as it did in 1960. We talk around and around and around each other without ever really listening to what anyone is saying or considering that they may not be in a place to hear it and take it to heart. We have become so consumed with our own viewpoints that it never occurs to us that we may be shouting into a vacuum and to just shut up.

Talk it out with your family.

Last month we took a little camping trip and had some time to unplug. While we sat around in our camp chairs we took the temperature of our family to see how everyone was doing. I decided to take this opportunity to let them know that I was feeling super stressed about being the sole mess picker-upper and de-clutterer in our house. I feel unappreciated and overwhelmed when everyone comes in, does their thing, leaves a mess, and moves on while I’m left to clean up.

But they didn’t know that. They just saw that things were picked up later and (I think) assumed that it got done without complaint. They didn’t know that I was grumbling about it under my breath, bottling in resentment until I blew like a volcano.

Turns out my family can’t read my mind or my passive aggressive body language. Turns out I need to let them know I need their help. What a novel idea…asking for help instead of assuming the people around you know what you want and need.

I’m thiiiiiis close to finishing Present Over Perfect: Leaving Behind Frantic for a Simpler, More Soulful Way of Living

by Shauna Niequist. Even though it has taken me a long time to finish it I have enjoyed looking in on her busy life and seeing how she struggled and failed at over committing herself.

I admire her ability to start saying no to thing, prioritizing her family over work and volunteer commitments. I see how she is trying to create balance in her life and accepting that she can’t do it all and depending on others to pick up the slack. That’s all well and good but what happens when others don’t pick up the slack? When it comes to non-work (i.e. non-paid) responsibilities there two types of people; the people who say yes because they believe in what they are doing but also because they may be the only ones who will do it. What happens to organizations that depend on volunteers when there are no more volunteers? What happens when everyone says that they need to start saying no? What happens to the jobs that depend on selfless souls when all those selfless souls are worn out and need to prioritize their health and family over commitments?

The American volunteer is changing and with it the landscape of organizations that depend on volunteers. I would be curious to know how Shauna Neiquist handles that conundrum.