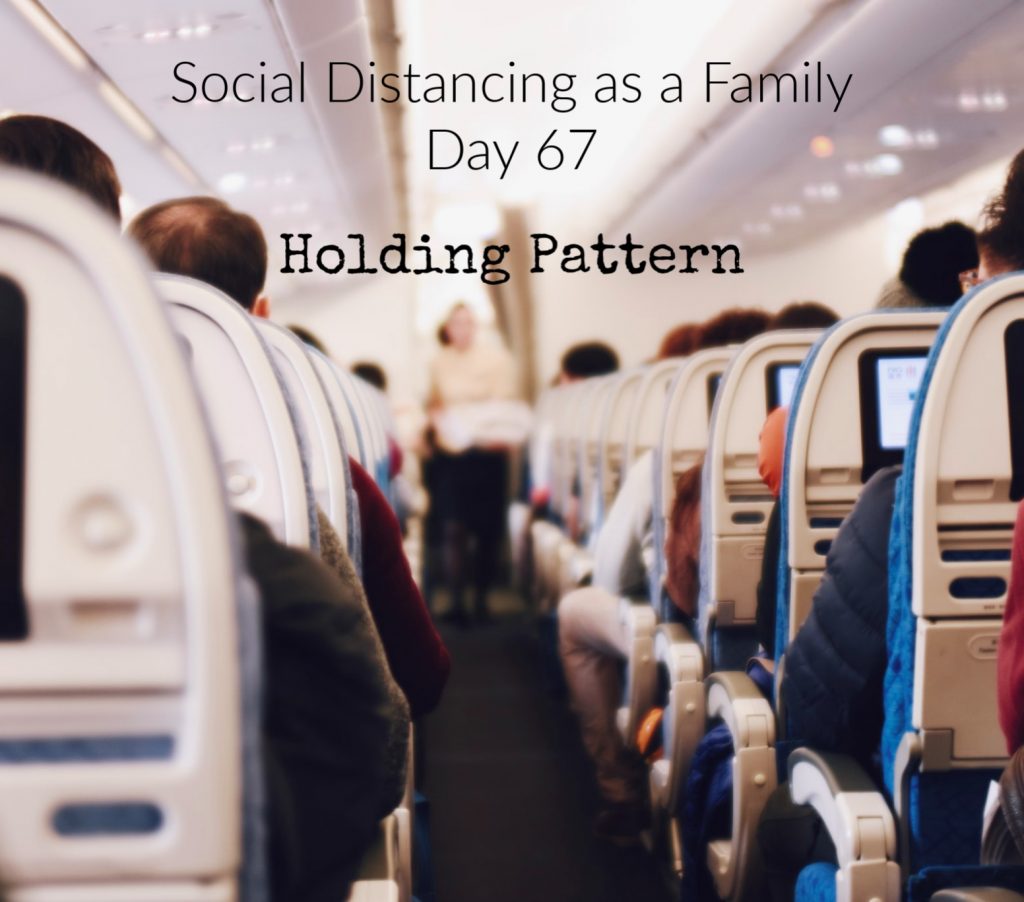 I’ve been thinking about the current state of social distancing (because what else is there to think about?). To stay in or go out; to get your hair cut with or without a mask; to actually sit down in a restaurant or continue to get it curb side? To play nicely by the rules for the sake of others health (both physical and mental) or to be a jerk and do whatever the hell you want because ‘Merica?

The reason we are all wound so tight (besides the obvious) is because we don’t have an end date. There isn’t a place on the calendar we can turn to and say Okay, by this date all will be back to normal and we can resume things the way they were.

The current state of uncertainty reminds me of air travel. Remember when we all used to travel by air at the drop of a hat? Those were care free times. Remember those times when you thought your flight was coming in for a landing only to realize you had been circling the city and airport for 20 minutes? The pilot would come over the intercom to tell you that there was turbulence or high winds or a queue of other planes wanting to land and you were 378th in line. You would circle and circle and circle not knowing when you would get to land. You would watch your connecting flight time come and go. The pilot would make updates letting you know it would be about another 30 minutes and then 30 minutes later there would be another update for another 30 minute countdown. You would stay in a holding pattern for so long you began to become anxious that the aircraft would run out of fuel mid flight and plummet to the ground. Sometimes you would get the dreaded announcement that there was no way to land in your scheduled airport and you were being diverted to a nearby airport and the folks on the ground would figure out connecting flights once you were actually standing in said random airport. You would find yourself in an angry mob pushing up against a counter where two frazzled employees tried to make the impossible happen: give every passenger what they want right at that minute. Then the most dreaded of announcements…there were no more flights for the night but you could stay in the airport Holiday Inn for free (oh how magnanimous of them) but they won’t let you have your bag because they can’t unload the belly of the plane so here is a hygiene kit with a toothbrush and a yellow plastic comb. They know you’re ready to chew your arm off so here is a meal voucher for $10 for dinner, breakfast, and lunch. Have fun rationing out those pretzels.

So here we are not knowing when we will land this plane. Dr. Fauci is our pilot trying his best to keep everyone safe and calm, waiting for the newest updates from medical experts and the CDC. The air traffic controllers are trying to figure out the safest way to land all the planes but their equipment is broken and they are making decisions by simply looking in the sky:

Jim: ummmm…I think that one should land next. That seems like a pretty safe bet. What do you think Bob?

Bob: But if we land that one next all the others may blow up. Or not. I’m not really sure what will happen.

Larry: Let’s just let them all land. They’re gonna’ run out of fuel.

Bob: But if they all land now they will crash into each other.

Larry: But the fuel! They are going to crash and burn!

Bob: Shut up Larry! They will overwhelm the runway if you let them all land!

Larry: You shut up Bob! The fuuuuuuueeeeeeeellllllll!

Jim: ummmmmm….maybe we should let them land according to who has the least amount of fuel.

Then there is the angry mob at the counter demanding to be put on a plane right that second. Suddenly the scene looks like Hodor trying to hold the door. Previously nice and normal Americans have become a horde of crazed, out of their mind zombies who gladly eat Hodor alive while some of us run away screaming hold the door. We escape to our solitude never sure when it’s safe to come out.

I wish I could wrap up with good news or something positive. Unfortunately, with so much conflicting information out there, we’re all in this holding pattern without a clear end in sight.

I’ll have an answer for you in the next 30 minutes.