Just because St. Patty’s day has come and gone does not mean you have to wait an entire year to enjoy corned beef again.

Corned beef is just about the easiest piece of meat you can make. Seriously. It comes with it’s own little packet of spices. Just put the meat and spices in a pot, cover with water and simmer, covered, for 3 hours. It is really that easy.

This is what I did to make it extra special: When it’s done cooking I take it out and let it rest. There will be a layer of gross looking fat on top and you want to slice that off. Now spread grainy mustard on top then top that with brown sugar. Set under the broiler for 3 to 5 minutes to create a nice little crust. Slice and serve!

I served mine with carrots and mashed potatoes. Traditionally, you should serve it with cabbage but that makes the house really stinky and most people don’t like the taste. However, on New Year’s Day I made a braised cabbage dish that amazed us all. When I lifted the lid to check on the cooking process the kitchen smelled like the precursor to a fart and Dear Husband wrinkled his nose and asked if he really had to eat that. Well guess what? You do have to eat it and he went back for seconds. I’m not going to give you the braised cabbage recipe now because it is a lengthy process. Maybe if you stick around until New Year’s Day, 2012 I’ll post it then.

Corned beef has a very distinct taste so your picky eaters may turn their noses up at it.

Here’s Harry wondering what this is and deciding if he is going to partake in the St. Pat’s fun. He didn’t.

Addison wasn’t there that day so I can’t tell you how many minutes of screen time he ate in corned beef. I can speculate as to how it would have gone. I would have told him that he had to at least try it. He would do so reluctantly with a lot of ketchup. Then I would make him take a few more bites if he wanted to see the Wii the next day. He would have then choked down the tiniest bite of mashed potatoes. He hates them. Weird. He will literally gag as he tries to swallow and it drives me crazy. I nearly hit the ceiling whenever he does this and it’s a good thing Dear Husband is there to play referee. Again, I digress.

Anyway…I think you should have corned beef for dinner this week.

It will make great sandwiches the next day.

This week I made Coconut Chicken Curry thanks to a recipe I found on Pioneer... 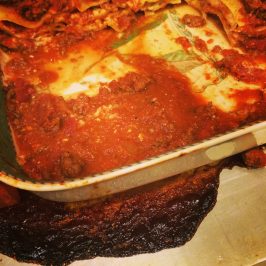 My friends at Red Gold Tomatoes must have known that I’m freezing my tookus off...

Having a birthday right around Christmas can be a stinker.  Last month we visited my...

Friends, I can’t believe what I’m about to tell you.  Yesterday Addison knowingly consumed spinach...

I love, l-o-v-e, love Cook’s Country magazine. It’s brought to you by the people over...