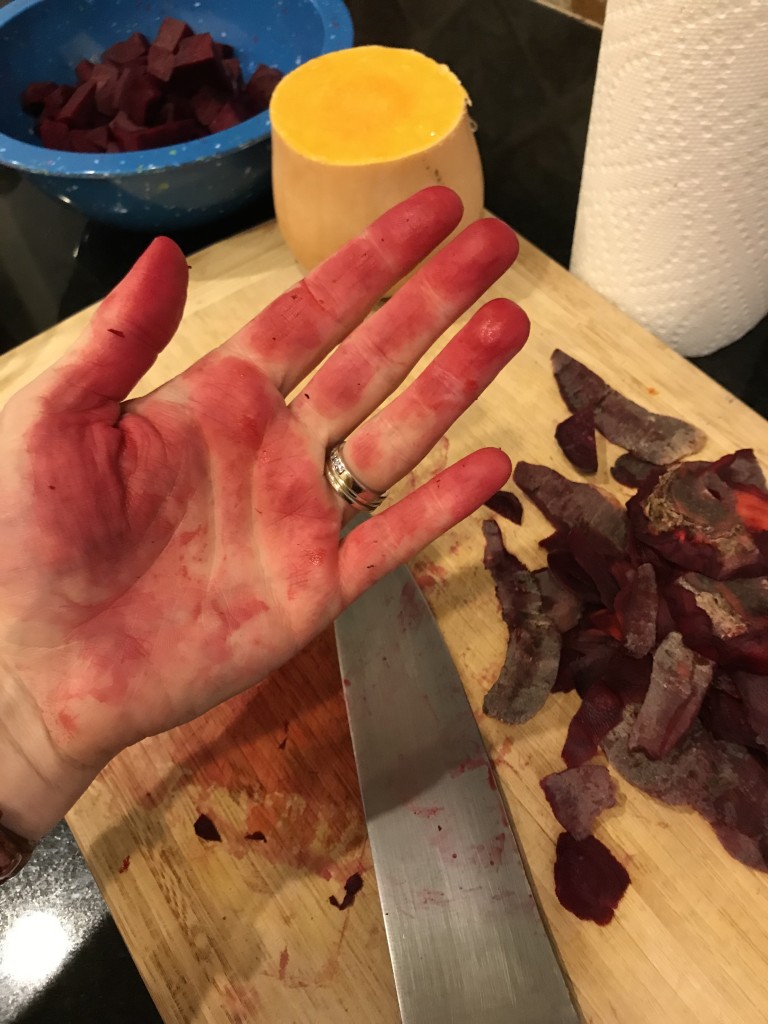 In case you didn’t know, Harry is in Cub Scouts. This is his second year and he is currently a Wolf. Or is it a Tiger? Maybe a Panther? Possibly a Jackalope. Whatever it is, it has fangs and he is adorable in his uniform.

His most recent den assignment was to plan a meal with a grown up. Find a recipe, make a list, shop for the ingredients, and prepare the meal. I’m not really into kickball, but meal preparation is in my wheel house.

I set him up with a few Pioneer Woman cookbooks since they are heavy on pictures and step by step instructions. He thumbed through two books and (with no help from me) decided on herb roast pork tenderloin with cornmeal cakes and roasted root veggies. That’s my boy.

The boys are often with me at the grocery store but it was fun to have an active participant rather than someone who runs off to the video game section. For this trip I abandoned my usual shopping spot (Target) with the hopes of finding decent produce and meat. Sorry Target but you suck when it comes to produce and meat. Groceries or Chip and Joanna. Make a decision Target because clearly you can’t do both.

Instead, Crest is where I found a friendly butcher who trimmed the pork and a beautiful display of fresh veggies. PW’s recipe called for parsnips, celery root, carrots, and a fourth veggie – dealers choice. Parsnips and celery root are out of season so we couldn’t find that. Instead we went with beets, carrots, and butternut squash.

This combination is a revelation.

I was never a fan of beets growing up but I think it is because my mom just at them right out of the jar. The concept of making them all fancy by roasting them or serving them with goat cheese had not hit the modern kitchen yet. Way back when, you canned your beats yourself then you would later open the jar and eat the beats. The end. Now you can serve them in a salad with toasted walnuts and blue cheese or goat cheese along side a poached pear. Or you can slice them and serve them with pickled red onion. Or you can roast them under the broiler with other root vegetables. Don’t you want to eat beats now? The other fun thing about beats is that they turn your poop purple.

While having a little helper in the kitchen made for a slower process, it was fun to have him be a part of the preparations and in turn, be excited about what we where serving the family that night. Since this was a chop-heavy meal, he helped my by peeling the carrots and stirring the cornmeal. I tried to teach him the subtle art of sprinkling salt as opposed to just dropping a spoonful on the food. 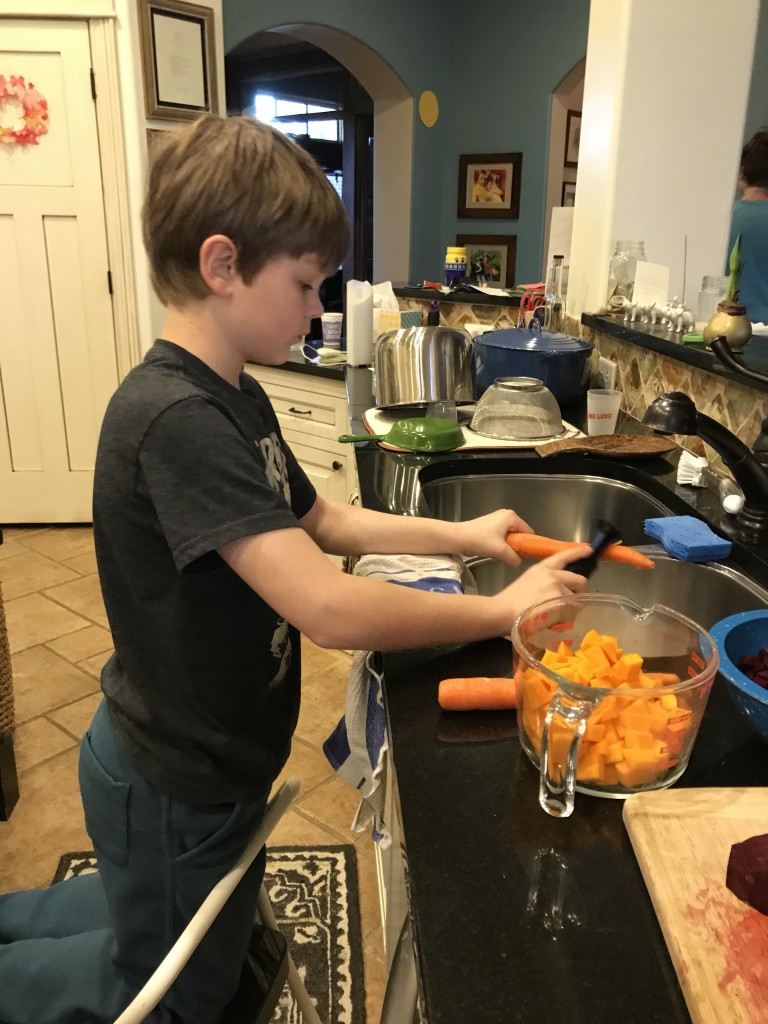 P-Dub’s recipe for herb pork tenderloin is divine and so easy. She suggested serving it with peach or plum preserves. For some reason her recipe calls for heating it up with one cup of water. This is clearly a mistake. I followed her instructions and ended up with peachy water. That went down the drain and instead, I warmed the preserves with just a splash of water. It was heavenly.

Again, the art of the salt sprinkle came into play along with proper distribution of dried herbs. Making sure your herbs and salt are evenly dispersed on your meat is, apparently, a learning curve.

The end result…everyone was really happy. I don’t think Addison and Harry were as excited about the beets as I was, but they ate (some) of them and that’s what counts. Thank you cub scout cooking challenge. 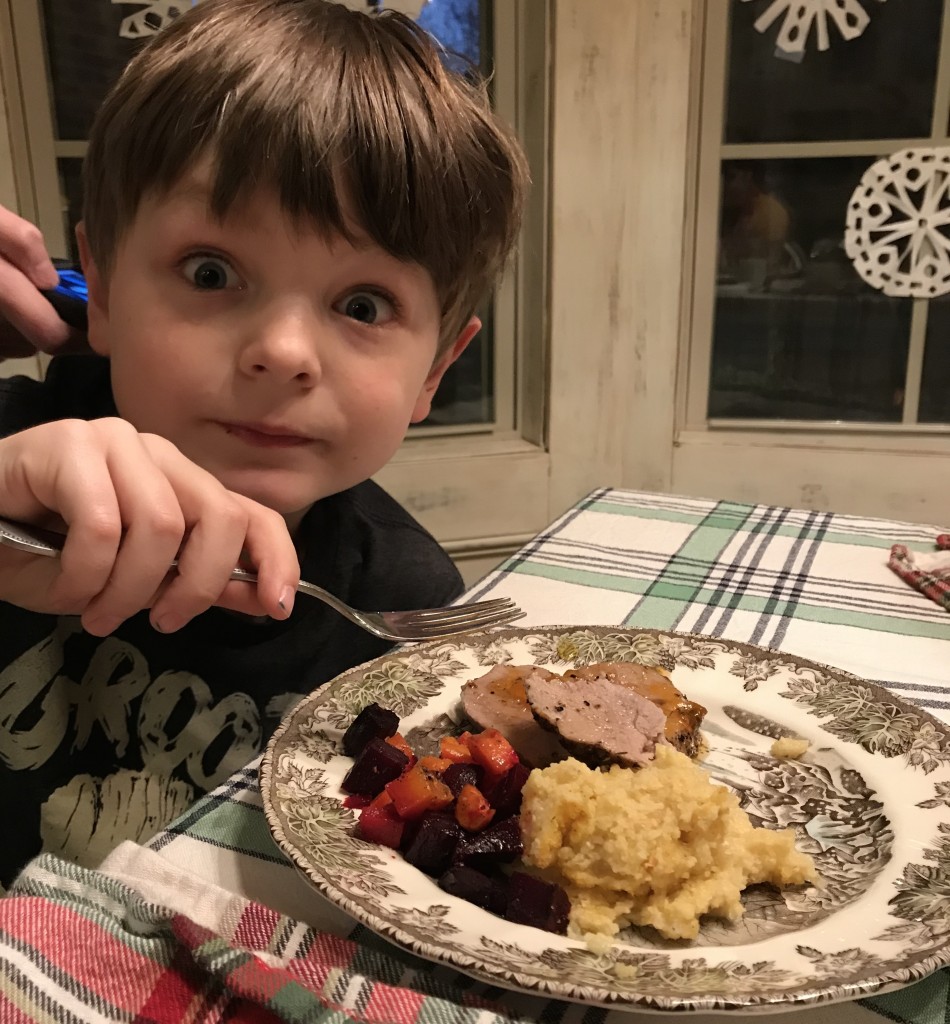 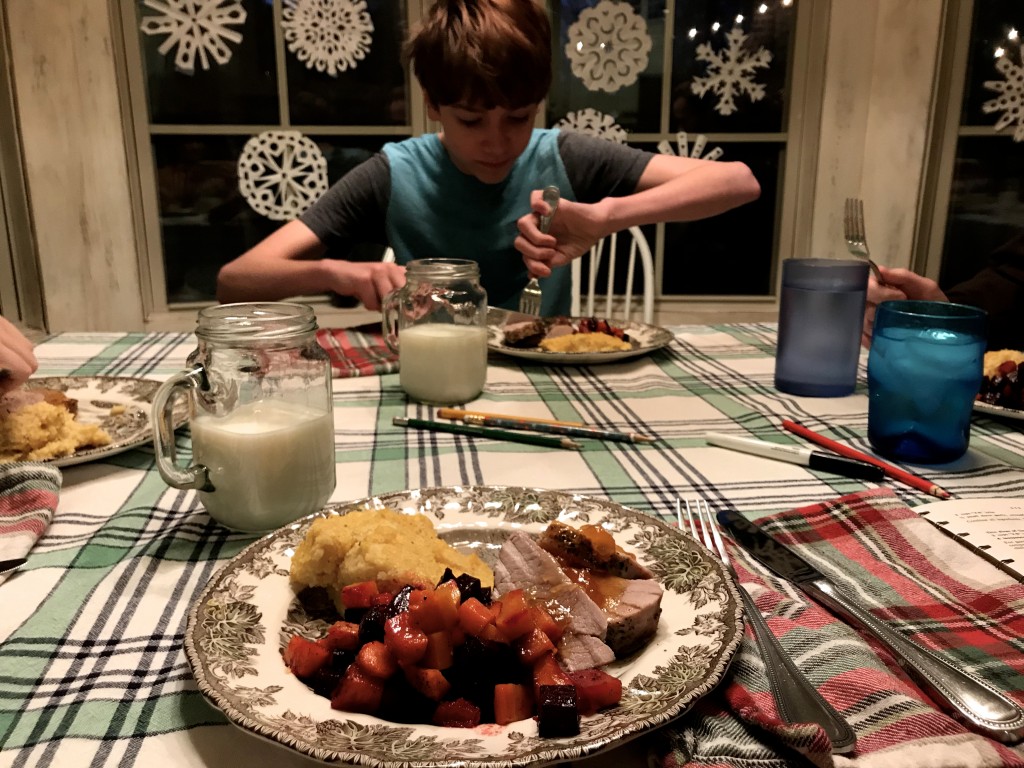